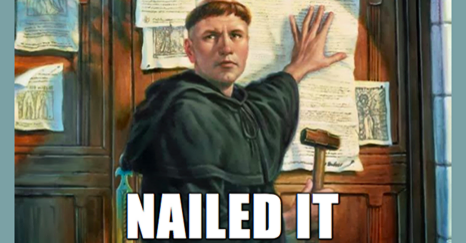 Ask 100 (or maybe 1000!) people what holiday is on October 31st, and you'll almost certainly get 100% consistency:  It's Halloween!  But as Protestant Christians we need to be equally aware that 498 years ago, on October 31st 1517, a trick-or-treat happened at the doors of a church in Wittenberg, Germany that would literally change the world.  One small-time monk named Martin Luther was so grieved by the myriad of abuses happening within the Catholic Church that he decided to make a statement about it.  Now, surely he could not have predicted all that would come after he posted his 95 theses to the door of the church, but fortunately for him God had provided people before, during, and after his life who would help carry the mantle of the Protestant Reformation.

October 31st was formerly known as "All Hallow's Eve", with November 1st being "All Saint's Day" celebrating those who had been martyred for their faith in Christ.  It is a reasonable hypothesis that Luther strategically chose this time of year to make a statement and essentially invite his college professors (he was a young man at the time) to debate the abuses of the church.  See, Luther was becoming convinced of something that most Protestant Christians today don't think twice about.  He was increasingly convinced about what we now call "Sola Scriptura" - the truth that the Bible is our final authority for life and truth, not any one Church or any man representing the Church.

But Luther did not do his little trick-or-treat in hopes of starting a Reformation.  If it wasn't for a nameless visionary taking his 95 theses statements and translating them from Latin into common German and using the printing press to distribute them far and wide, things may not have escalated so quickly.  But before long, Luther was both a hero and villain depending on who you asked, squarely in the cross-hairs of the Catholic Church that he actually intended to stay inside rather than defect and create a new "brand" of the Church.  He wanted reformation inside the Catholic Church, but it became apparent that was not going to be an option.

498 years later, we would be wise to recognize this day for more than candy and goblins.  It is a day that God used to catapult the Church away from baseless traditions and rituals and toward the Word of God being our supreme authority for life and godliness.  It's a day that we can look back on and be grateful for the profound truth Luther spent his life defending:  that salvation is an act of God's grace received by faith alone in Jesus Christ alone, not in any combination of our works or righteousness.  It's also a day to consider God's sovereignty over his Church, and his care for the Truth to reign supreme in his people.

So yes, today is Halloween.  And no, I am not calling for all Christians everywhere to boycott it and throw Reformation Day Parties.  It would be fun to all dress up like monks and nail 95 theses on our neighbors' doors, but I cannot officially advise such action.  Instead, just enjoy yourself to whatever responsible degree you choose to do so... and spend some time praising God for our brothers and sisters in Christ 498 years ago who paved the way for the spread of the gospel and the Church around the wrold.

Want more good reading about how to approach Halloween?

9 things you should know about Halloween and Reformation Day

What Christians should know about Halloween

Fight or Freight?  How to redeem Halloween

Five points for all our fears

The State Of Small Groups During COVID-19

Meeting Jesus at the Feast: A Christ-Centered Passover

What is Biblical Counseling?

Transgenderism in Kindergarten: Understanding and Responding to the Sexual Revolution

5 Things You Need to Know About The Shack

How to Meditate on God's Word

Don't know how you should vote? Here are 3 things you need to know.

Christmas Trees, gifts, and candy canes - is there any Christian meaning to Christmas symbols?

What is Advent and should I celebrate it?

Coming To Harvest This Christmas

15 Years Later: Reflecting on God’s Faithfulness after my mother’s death

Is Baptism About You… Or About Jesus?

What Does an Associate Pastor Do?

How should we respond to the SCOTUS ruling on same-sex marriage?

Believing the Love of God for You

Why Are We Doing a Ministry Fair?

The How and Why of Prayer, Recap part 2

The How and Why of Prayer: Recap part 1

Learning to Rejoice in the Gospel

My Wife is My Best Friend

What To Do With Your Feelings